Special Issues in a Grey Divorce 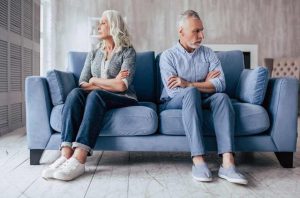 The overall divorce rate has dropped sharply in recent years, mostly because the marriage rate has declined even faster. But grey divorces, which is a divorce over age 60, have doubled since the 1990s. People in this age group are much more active than they were a generation ago. For many people, 60 is the new 40. It’s difficult to spend these active years in an unfulfilling marriage.

All marriage dissolutions involve some emotional and financial issues. The issues that these couples face are markedly different from the issues younger couples often deal with. It’s important that your Denton divorce lawyer be aware of these issues, so the next chapter of your life has a good chance to have a happy ending.

Children are usually grown and out of the house in a grey divorce, which is also known as a silver-splitter divorce. However, although child custody might not be an issue, these divorces still involve some emotional matters.

Frequently, adult children have a hard time accepting their parents’ divorce. Grown children have a lifetime of happy family memories. As a result, they often blame Mom or Dad for the divorce. If that happens, they often cut off grandparent-grandchild visitation in retaliation.

On a related note, many adult children are afraid that graduations, weddings, and other family events will become chess matches because Mom cannot sit too close to Dad and his new wife. Allaying these fears often goes a long way toward ending the aforementioned visitation dilemmas.

As people near retirement age, their houses are often paid off and their retirement accounts are usually well-funded. Dividing these assets can be troublesome, especially in a community property state like Texas.

Immediately selling the house and dividing the proceeds is often a bad idea, for emotional and/or financial reasons. If one spouse stays in the marital residence, the other spouse often receives a lien for his/her equity share. Subsequently, when the remaining owner sells the house, that lien must be paid.

Apropos of nothing, divorce changes the deed. But it doesn’t change the note. Usually, refinancing is the only way to remove a co-owner’s name from the note.

Retirement accounts have more than a substantial financial value. They usually have a high emotional value as well. A 401(k) or another such account often represents future financial security and the reward for a lifetime of saving.

If one spouse wants to retain a larger share, a divorce family law attorney often negotiates setoffs. For example, the Wife might agree to give up at least part of her share if the Husband agrees to pay more spousal support.

If you are over 60 and your marriage is ending, there are some special issues to deal with. For a confidential consultation with an experienced divorce lawyer, contact Navarette Bowen P.C.